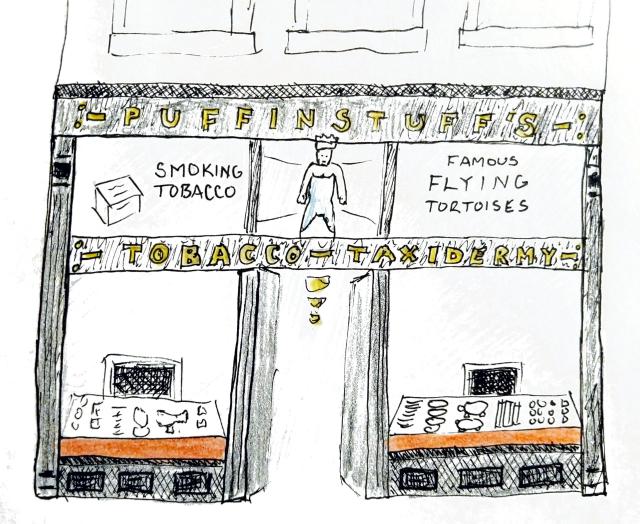 The shop burned down last night. Puffinstuff’s Tobacco and Taxidermy is no more than a reeking hole in the ground.

I awoke from my slumber to a sudden fall from my bed. A terribly old-fashioned gendarme had pulled me by the ankles and was in the process of dragging me toward the door of my bedchamber. Hardly knowing what to think, I cried out only to find myself voiceless from what I later learned to be the smoke from a terrible conflagration.

The guard released me once we reached the street. I, of course, ran back inside immediately to claim as many of my specimens and finest clothes as I could salvage. I only managed to grab my second-finest cape, my nice scissors, a bag of stuffing, and the latest creation from my workbench: my fantastic walking-trout (the one with the crocodile legs) before being forcibly dragged back out to the street by the same gentleman.

Dazed, I wandered about the borough for the better part of the morning before succumbing to inevitability (and the need to get away from the smell of burned fur) and retiring for one last drink at the corner pub: Wet & Wild For Malda Hyde.

Four Strangers Meet in a Tavern

Those in the business will recognize For Malda Hyde as the usual hangout for my “fellow” (if you can call them that) taxidermists. I oscillate status within the guild between persona non grata and “pursued by pitchfork-wielding non-imaginatives.” [At risk of appearing overly condescending, I’ll point out that I found a literal pitchfork in the alley between my shop and the next.] On this day, whether through their guilt or satisfaction (or the pitchfork I was now carrying), my peers let me drink unmolested.

The beer was a vibrant blue today. I hope it was worth the whole pound I paid for it, because Franklin gave me no change.

I barely had a sip before being accosted on all sides. Can’t a man drink himself to death in peace? My some-time collaborator Babs (Bodkins) rushed in with her usual grace. She lamented something about a stolen bit of squirrel roadkill before wallowing in the greater shame of my incinerated establishment and smoke-ruined second-best cape. I suppose she thought the idea of the gift would cheer me up. On my other side was the very same guard that rescued me (but, it bears repeating, not my creations) from certain death. It appears that he was until quite recently a member of the very same cult responsible for the attack on my property. Ecclesiastical differences caused him to part ways with same and feel some sort of duty to see to my survival.

We proceeded to drink together (£1 each once more to Franklin). Babs and the guard (one Guadalope Twaddle) conversed while I tried to wish myself into drowning in my beer.

At some point in the morning, a small sallow-complected man wearing all black and the tiniest spectacles I have ever seen expressed a rightful amount of admiration for my walking-trout. He introduced himself as Baker, a “procurer-of-things” for a Mr. Algernon Malverarey, a connoisseur of such amazing creatures. Well, that perked up my spirits. Baker provided an address many boroughs away as well as traveling money for the trip to meet his employer who may be willing to commission many other such wonders.

As we were about to depart, another soul introduced himself. This was a face familiar to me, though whose identity was unknown. This was Noggin Spit, also lately unemployed along with Babs, Guadalope, and (due to the loss of my facility), me. As none of us had any better prospects, we decided to take the £20 provided by our benefactor and travel together to see what fortune we could make together.

As soon as we exited the pub, we were accosted by a group of ne’er-do-wells wearing charcoal grey suits and monocles. Yes, it was those obnoxious Tony Perkins Poodle Boys. They have some claim that I still don’t quite understand that I owe them £10,000 because someone burned down my establishment. There were threats of violence in which a 20-stone toddler with a cricket bat appear ready to strike any person within range. Luckily, good sense prevailed, and the conflicting bureaucracies involved will be engaged to deal with it. I promised to call upon my guild (I won’t), and the puppy boys went to consult with their administrator of choice. With any luck, I will never be within five boroughs of this place again.

We engaged an autocrawler to carry the four of us to Algernon Malverarey’s home (£16). As my clothes still smelled of smoke and failure, I imposed upon the group to stop at a clothing store en route. The driver left the meter running.

A charming, yet horrifying spider-like mockery in a fine wool suit assisted us in finding new clothes. I came away with a bespoke-seeming crushed velvet suit for £3 (used). The mockery threw in a chartreuse pocket square, so it was certainly a value, even if it reeked of naphthalene.

It was a short jaunt from there to Malverarey’s house. We were granted entry by the houseman, Flaker.

And the walls. THE WALLS. It seemed as though every centimeter was covered with the most fantastic creatures. As inspired as my specimens are, each and every one of these exceeded them in every way. I entered a fugue state as Flaker led us up the stairway to Malverarey’s office. Each step was a thousand years as I journeyed through the endless chasms of time and space in my mind. I saw a future where not only had I matched the vision captured by this unnamed creator, but where I was instructing whole new generations in the exciting new frontiers of this surrealist taxidermy that I will begin to refer to as Furrealism.